Rules for the licensing of child performances

On 6 February 2015, The Children (Performances and Activities) (England) Regulations 2014 came into force.  These new Regulations have modernised the previously outdated rules which now make it easier for producers to work with children.  Some of the key changes are as follows:

There has been a big change to the earliest and latest hours that a child can be present at a place of performance or rehearsal, which are:

The above hours also have to include any hours of education that the child must undertake.  There also has to be an overnight break of a minimum of 12 hours, unless the night working rules apply.

(4)  Under the new Regulations, a child can take part in a performance for a maximum of 6 continuous days, as compared to 5 under the old rules.

(5).  Under the new Regulations, night working is allowed so long as the maximum number of hours permitted at the place of performance or rehearsal is not exceeded.  The child must also have a minimum of 16 hours break between the next performance or rehearsal.  If night working is undertaken by a child on 2 consecutive days, there can be no working by that child outside the usual working hours for the next 7 days. The old rules were much more restrictive in that work after midnight was not normally permitted and a special application had to be made for it.

Chaperones have a little more discretion in that under the new Regulations they can allow the usual working day for a child to be exceeded by 1 hour (previously under the old rules it was 30 minutes) so long as (1) the total number of hours permitted at the place of performance or rehearsal is not exceeded; and (2) the circumstances that necessitated it were beyond the control of the licence holder (producer).

For completeness, these new Regulations apply to:

(1)  children resident in England (and those resident outside GB) who are performing in GB; and

(2)  children who go abroad to perform.

You can chaperone your own child and you will receive the Chaperone fee. You can also become a licensed chaperone to legally chaperone other children up to a maximum of 12.  Its free to apply to your local borough. To find out more, click on the link for Barnet or visit your local borough.

If the production is unable to supply Chaperones, 360 Arts Management use their own chaperones or a highly reputable chaperone service called Neilums Chaperones 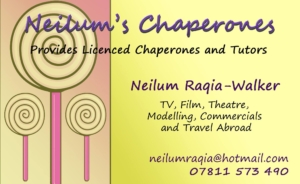